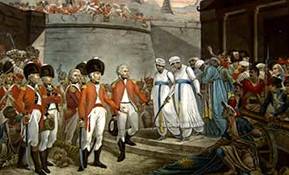 “What, & When, Was the Raj?: How a Private Company Came to Rule a huge Empire”
Lecture by Robert Frykenberg, Professor Emeritus of History & South Asian Studies, UW-Madison – Born and reared in India, trained in America and Britain (Ph.D., [London SOAS], 1961), he has been a historian at Wisconsin since 1962 (and has published many articles and books).  From a localistic, bottom-up, Indocentric perspective, he will discuss the remarkable amalgam of elements and forces — in manpower, money, and methods — that contributed to what was, in many ways, India’s own Raj, a realm whose “’halla-sicca‘, or ‘true coin’, was of ‘purest silver’”. Suggested Reading: British Indian Empire.

“British Policy in India Under the Raj”
Lecture by James Jaffe, Professor of History, UW-Whitewater; coordinator, UW-Whitewater South Asia Initiative; member of UW-Madison South Asia Legal Studies Working Group, author of 3 books and many articles on British history, currently working on a study of competing conceptions of law and justice in South Asia during the late eighteenth and early nineteenth centuries. This talk will discuss the political and social effects of British rule in India in the period between the Mutiny and the First World War with special attention being paid to the role of British domestic issues in the formation of imperial policy. Among other issues, how the British viewed the Raj, how the Raj continued to effectively rule India, and the administrative impact of British rule in India will be discussed. Handout: British Policy under the British & Ilbert Bill.
______________________________________
Friday, September 11 – 4:00-7:00 pm

Keeping Corner Book discussion with Kashmira Sheth
Madison author, Kashmira Sheth, has written a very moving tale, Keeping Corner, of a young widow during the intersection of India’s move towards independence. She will discuss the story and how she came to write about this difficult topic. This book is an excellent choice for middle and high school curriculum. A book will be provided to each participant (we hope they arrive by Friday!) Visit Kashmira’s website for more information about her other books.

“Whose Taste? Indian Silver for the Raj” (Chazen)
Lecture by Vidya Dehejia, exhibition curator and the Barbara Stoler Miller Professor of Indian and South Asian Art, Columbia University. Dehejia will discuss the remarkable amalgam of taste seen in the richly ornamented silverware made during the British Raj, when Indian craftsmen satisfied demand for European form but embellished the pieces with “native” patterns.

“Indian Crafts and the British Raj”
Lecture by Julie Codell, Professor of Art History at Arizona State University and faculty affiliate in English, Film and Media Studies, Center for Asian Research, and Women’s Studies. She has published 7 books and dozens of articles on Victorian culture, film, and India under the Raj. Her talk will focus on how important the crafts were for Victorians’ understanding of India and in British imperial policies in India. One theme of this talk is how realities of cultural exchanges in imperial encounters clashed with notions of national traditions and authenticity which became increasingly political. In vigorous debates between Indians and Britons and within both countries over handicrafts vs. machine production and village vs. city, Indian craft techniques, production, hereditary artisans, and global marketing were crucial not only to the development of Indian cultural self-definition, but also to ideals of the British Arts and Crafts Movement which held Indian craft goods in high esteem.

“Delight in Design; Indian Silver for the Raj” (Chazen)
Gallery talk by Joan Raducha who holds a BA in Anthropology, an MA in South Asian Studies, and a PhD in Buddhist Studies from the University of Wisconsin-Madison. She was the on-site coordinator for the University of Wisconsin College Year in India program in the early 1970-s as well as a student in that program as an undergraduate.  Dr. Raducha has conducted research in both India and Pakistan on ancient art and archaeology.  Her dissertation focused on the relationship between early narrative art with Sanskrit, Pali and Prakrit texts.  She has taught about the art and culture of ancient and medieval India.  She served as Director of International Academic Programs (study abroad) and Associate Dean in the Division of International Studies at the University of Wisconsin-Madison.  Among her publications is the catalogue for an exhibition for which she served as co-curator on Indian Miniature paintings and textiles “Two Faces of South Asian Art.”  Dr. Raducha selected and wrote the labels for the paintings from the Chazen collection included in the current exhibition.

Film: Passage to India (1984) 163 minutes
Based on the novel by E. M. Forster, the film is set in colonial India in 1924. Adela Quested, a sheltered, well-educated British woman, arrives in the town of Chandrapore, where she hopes to experience “the real India”. Here she meets and befriends Dr. Aziz, who, despite longstanding racial and social taboos, moves with relative ease and freedom amongst highborn British circles. Feeling comfortable with Adela, Aziz invites her to accompany him on a visit to the Marabar caves. Adela emerges from the caves showing signs of injury and ill usage. To Aziz’ horror, he is accused by Adela of raping her. Typically, the British ruling class rallies to Adela’s defense, virtually convicting Aziz before the trial ever begins.

“Influence of British Taste on Indian Music”
Lecture by Lalita du Perron, Associate Director of the Center for South Asia. She has published a book and various articles on the way the texts of North Indian classical music changed in response to colonial rule and post-Independence modernity. Her illustrated presentation will outline the twofold Indian response to the colonial charge that Indian arts were ‘debauched’: on the one hand Indian music scholars asserted that Indian music was as ancient and morally upstanding as Western classical arts, on the other hand they tried to limit those aspects of Indian music that they thought might be disturbing to colonial tastes– most notably dancing girls and their occasionally licentious song texts. Click here to see Dr. du Perron’s presentation.

The UW-Madison Center for South Asia will be sponsoring a workshop for middle and high school teachers in conjunction with an exhibit at the Chazen Museum of Art, “Delight in Design: Indian Silver for the Raj,” a selection of expertly decorated silverware produced by craftsmen from different regions of India during the late British rule between 1858 and 1947. The workshop will include lectures, a book discussion, a film screening, a gallery tour, a metalsmithing demonstration, and a discussion with educators on curricular outcomes.

The relationship between the British Empire, traders, and military officials had a significant impact on India and her people. Indians were faced with new forms of power struggles and social dynamics, reinterpretations of their laws, redesign of their cities, mapping of their subcontinent, and a certain British standard was imposed on their customs and practices. India was forever changed by her colonial rulers. The British impacted the social production of arts and music, and engendered a hybridity that is characteristic of empires and their colonies. This workshop aims to question these relationships, enhance educators’ knowledge of this part of India’s history, and offer support in the development of learning modules for classroom use.

Events include talks by UW faculty and other associates on: Company Rule: East India Trading Company in India, British Policy in India under the Raj, Whose Taste? Indian Silver for the Raj, Influences of British Taste on Indian Music, a Gallery Tour and Talk, Demonstration of Metalsmithing techniques, a Book discussion, film screening of Shatranj Ke Khiladi (The Chess Players), 1977, directed by Satyajit Ray and Lagaan, 2001, directed by Ashutosh Gowariker. For a printable workshop flier, click here.