South Asia is the birthplace of four of the world’s religions: Hinduism, Buddhism, Sikhism, and Jainism. Three that come from West Asia: Christianity, Islam, and Judaism arrived later. Zoroastrianism, the major religion in ancient Persia (now Iran) until it became Muslim, also survives in India.

Let’s look at the many religions found in South Asia:

Hinduism
Unlike many of the world’s religions, Hinduism has no founder, but rather evolved over time. It is not only one religion, but a group of related beliefs. There are many different ways of seeing god in Hinduism, but many people believe that these are only one representation among many. The different images of gods and goddesses are all ways of seeing Most Hindu sects share a few elements in common with each other.

dharma
Dharma is a word which may have many meaning in English. Among them are duty, merit, and law. To most Hindus, a person’s dharma is their duty in life according to their family relationship, their local community, and their god.

karma
Karma literally means “action”. To most Hindus, karma are actions performed in order to be sure that they fulfill their dharma.

This is the idea of reincarnation. In most Hindu sects, when a person dies, their soul is reborn again in another form. The form of this next birth is determined by the karma they performed, and whether they fulfilled their dharma.

Buddhism
Siddartha Gautama, the man who became know as “the Buddha”, was born in what is now Nepal. Siddartha was a young prince in a small kingdom in what is now Lumbini in south central Nepal. His father was a wealthy king who dreamed that one day his son would inherit his crown and be a king as well. 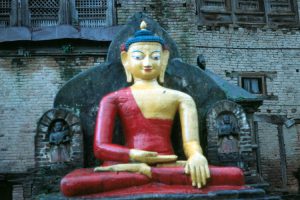 Although Siddartha loved his father and his family, his fate pulled him in a different direction. Living his days in splendor behind the palace walls, the young prince was shocked to see such suffering in the world on his first trip around the kingdom. Sickness, old age and death were things he had never seen in the palace, but seeing such suffering moved him so much that he decided to seek an answer to these problems

Siddartha left his life of luxury in the palace and gave up all worldly possessions. He tried many different methods of meditation as a monk, but eventually started his own school, or philosophy, to end the suffering of people on earth. While he saw himself as just a teacher, giving his Four Noble Truths and the Eight-Fold Path lessons to the people, many thought of him as a divine messenger, a god. He was called, “Buddha, the enlightened one” and is considered to be the founder of the Buddhist faith found all around the world. He gave his first sermon following his enlightenment at a deer park near the city of Varanasi in India. Today, Buddhism in South Asia exists primarily in Sri Lanka, Bhutan, Nepal, and Tibet. Buddhism gradually went into decline in India and spread to East and Southeast Asia where it remains prominent today.

Jainism
Jainism arose in northern India around the same time as Buddhism. The historical founder is Mahavira, who according to some was the last of a long line of teachers who reformed the Jain faith.

One of the primary contributions of Jainism is the doctrine of “ahimsa” or non-injury. According to this doctrine, Jains, especially monks, avoid killing living things. Mahatma Gandhi employed this idea as non-violence in the struggle for Indian independence meaning that his followers, although many times beaten and struck for their protest, would not strike back.

Sikhism
Sikhism was founded in the 16th century in the northwestern region known as Punjab, which is now part of both India and Pakistan. One who practices this faith is known as a “Sikh” which comes from a Sanskrit word sishya meaning “disciple”

Islam
Islam originated in what is now Saudi Arabia. The word means “submission to God”. In Islam, there is only one God, know as Allah, and Muhammad is his prophet. Islam came to South Asia in two ways: through invasion and through trade. Islam first arrived in South Asia around the 8th century A.D. when Arabs arrived in what is now southern Pakistan. However, Islam did not gain a foothold until the 12th and 13th centuries when Turks coming from Central Asia took power in northern India. While Islam took hold in the north through military means, in southern India it arrived primarily through trade. Arab traders came to southern India, to what is now the state of Kerala, for the spices grown in the region

Christianity
Saint Thomas arrived in India in the 2nd century.

Zoroastrianism
This religion arrived in India through refugees from Persia. People who practice this religion in India are known as “Parsees”, which refers to their origins in Persia. It is related to the early Vedic religion of India which later grew into modern Hinduism. Its major scripture is called the Avesta and contains hymns as does the Vedas in India.