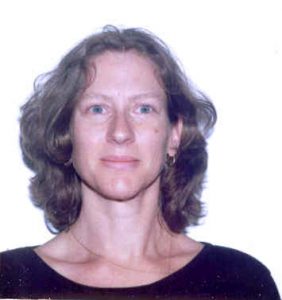 One of my most memorable moments was when we were working on one of our curriculum units. I was working on the Gandhi lesson plan and made the comment “I wish we had gotten a better video clip from the Gandhi museum lectures.” Just a few minutes later a car drove up with 5 Gandhian scholars who were on their way to a funeral 20 minutes from where we were staying. One of the men in the car–the premier Gandhian scholar Ravindra Varma from New Delhi–had heard about the NGO (non-government agency) that we were staying at and wanted to stop in. He gave us a quick,12 minute lecture about why teaching Gandhi was relevant and important in today’s world. It was phenomenal! The next day there was a feature article on him in the newspaper. Unfortunately the video sound did not come through, but I will use the article when teaching about Gandhi in my classroom.

I really enjoyed having the opportunity to interact with 16-17 year old students at the school that I worked in for a week. I had one week of working with 11th and 12th standard students at the Mahatma School in Madurai–standard is the Indian equivalent to grade; essentially these students were about the same age as the students I am working with at Wauwatosa East High School. My homestay was with the principal of the school. This family also ran a residential school on their property about 20km outside of the city. They had a huge hall on the third floor of their home and one night I was asked to speak to about 300 of the residential students. I found that students there are concerned with the same things as my students here–college, grades, relationships, balancing school, work and home responsibilities–and they enjoy some of the same things–hanging out with friends, listening to music, going to movies, reading…. Differences included what they were asked to do academically: the emphasis in India is on memorizing content for their exit test. 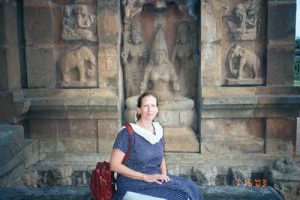 an ashram, and sacred mountains that had 2200 year old Jain carvings in the stone. I loved learning about the diversity of religious culture in India–I was presented with information that broke through many of the stereotypes that are often associated with Indian culture and religion. Most people assume that all Indians are Hindu and that Hindi is the language of choice. In the southern states the Dravidian languages are still very much alive. In Tamil Nadu–the southernmost state–there is a large population that rejects Hindi as the preferred language and is working to preserve the Tamil language; the purists lament the fact that even Tamil is becoming corrupt–for instance, many native Tamil speakers do not know the Tamil words for telephone or bus. The fear is that as words are lost, parts of the culture are also lost–in our own country we see this with American Indian languages.

Again and again we heard the warning: if you know something about India the opposite is also true. It was an eye-opening experience–I had moments of intense peace standing upon beautiful mountain tops and moments of great despair when presented with devastating poverty. I saw great wealth and academic rigor in the schools in Madras and struggling teachers and students in a poverty stricken village near my homestay. I met women breaking stones in a rock quarry with sledge hammers with their preschool children waiting patiently nearby and women academics and authors who rely on the latest technology to aid them in their daily work-related tasks. I met people working for non-government agencies to empower women through micro-banking cooperatives and creating medicinal gardens, to combat the spreading of AIDS in rural areas, to end displacement of the forest dwellers in central India, and to raise awareness of water rights violations and political corruption. All of the people that we met were kind, welcoming, and willing to share their struggles and successes with us.

The experience of the Fulbright Hays Group Projects Abroad has impacted my teaching in a most positive way. I feel much more qualified to talk about India when teaching World Literature excerpts of the Ramayana and Bhagavad Gita and the novel Nectar in a Sieve; though I am still cautious and warn students that I am not an expert–I just have some interesting observations that can help to illuminate our understanding of the texts. Last year I spent three days in class watching the movie Gandhi and had one day of discussion. This year I extended the unit to include genuine reflection and sharing of our experiences with violence and efforts to bring forth a non-violent paradigm in our society. The information from the Gandhi Institute really helped me and my students to see that violent behavior is much more than the physical–it can be verbal, it can be manifested in fear and fundamentalism, it can be as innocuous as inaction or passivity in the face of injustice. I was pleased with the projects that my students completed: the effort, the sense of commitment, the revealing of “the self” were all much greater than in any other project that I assigned throughout the semester.

I feel privileged and blessed to have had the opportunity to interact on a more intimate level with the people and the culture rather than having had a mere tourist experience. There are days that I find myself longing for India–I miss the sea air in Pondicherry, the bustle of Town Hall road in Madurai, the auto rickshaws, roof-top restaurants, the wonderfully warm weather. Most of all I miss the people. I look forward to the day that I can return.

Jean Hoffmann
Jean is an English teacher in Wauwatosa, WI.

– Peace and Non-Violence: The Teachings of Gandhi
– Women in India: Tradition vs. Modernity