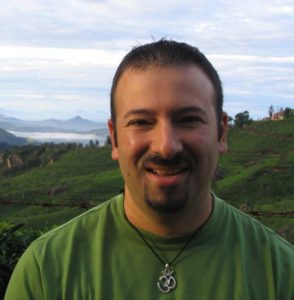 My day began at 5:30AM with the beeping sound of my watch alarm and a rare hot shower (we’ve gotten used to taking “bucket baths” by now, so a shower is a real treat). Becky and I went out for an early morning walk. The fog was still sitting on the sea of tea plantations that cover the landscape. I had no idea tea could be so beautiful.

The small village that borders the Sterling Hotel was just starting to wake up. Men gather in small groups outside tea stalls, a woman delivers a can of fresh milk, young children dressed in uniforms make their way toward school. We come upon an obstacle of four large cows firmly planted in the middle of the road. We notice their horns and threatening glares and consider turning back. Just then, two men, observing our dilemma from the distance, encourage us to pass and wave us through. With some trepidation, we tiptoe past the cows and to safety.

“This is the beautiful countryside of Munnar.
These hills are covered with tea.”

“With some trepidation, we tiptoe past
the cows and to safety”
Next, we come upon a man walking towards us. We watch him pick up a guava fruit that had fallen to the ground from the tree above the road. Much to our surprise, the man approaches us, stretches out his arm, and offers us his acquisition with a big smile. We politely said no, exchanged smiles, and continued on our way. It was another example of the kindness of strangers we have encountered on almost every step of our journey.

After Becky left to make a phone call, I met up with a 16 year old boy, who stopped me with the usual, “where do you come from?” After a few minutes of conversation, I learned that he was living in Munnar with a friend. His father died a year ago after losing his leg in a tea factory accident. His mother lives with his younger sister in another state,where she works stringing flowers onto garlands. The boy earns 20 rupees (less than 50 cents) a day working in a local shop that sells mostly cigarettes. He wasn’t looking for pity or a handout, but his story was one of the many heartbreaking stories we’ve heard about the struggle to find work and earn a decent living.
After some shopping in downtown Munnar, we headed to the family home of one of our van drivers, named Geva. Geva is about 28 years old and has been driving vehicles for work since he was 16. He speaks little English, but is kind and friendly and always has a smile on his face. He grew up in Munnar and his family invited all 13 of us over for lunch. The family lives in housing that is provided for families that work on the Tata tea plantation, which is where Geva’s stepmother works (his own mother died when he was a young boy.)

The home was a small cement structure at the end of a row of about 10 small attached structures. The house was about the size of two large walk in closets. We would eat lunch in the tiny Christian church which sits just a few feet from the house and where his dad works as a minister.

The entire family and neighboring families, greeted us and made us all feel very welcome. The children huddled around us and asked to have their pictures taken. The women had taken the day off of work to cook for us.

Eventually we sat down to one of the best home cooked meals we’ve had in India. We were treated to fried fish, chicken, rice, vegetables, homemade bread, and fresh fruit. Words could not express how thankful we were that this modest family opened up their home and hearts to a group of strangers. You could see by the expression on Geva’s face, that he was so happy and proud to have us in his home.

It was a perfect day for all of us, and another reminder of the values that seem so important here—friends, family, and community.