It’s early Wednesday morning and a few of us are up early to get out some email and make some phone calls. It is surprisingly cheap to make calls and use the internet. After today, this will not be the case as we will not have access to email.

Yesterday was a very full day. We started the day by visiting The Children’s Garden School. This school has about 1700 students varying in age from 2-18. This school takes in disadvantaged students as well as students from the surrounding area. Students with learning disabilities or physical handicaps were welcomed and mainstreamed with support in this school. What we saw impressed us. 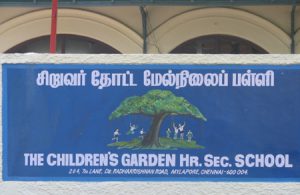 A daycare facility was available for teachers and their young children. Additionally, preschool was available complete with puzzles, building blocks and a sandbox filled with toys. In the classrooms, each student had his or her own mat and was on-task completing the activity at hand. For the younger grades this included puzzles and building blocks, while at the older grades students were studying English, Tamul (the local language), solved math problems using hands-on props or an abacus. At age sixteen, students must select the art or science track.

Also, in the principal’s office, they had a wall with the top test scores foIf the student chooses the science track, he or she will receive an hour of biology, chemistry and physics each day followed by an hour long lab. There were many other things that impressed; small things to larger things. First of all, in each class the daily attendance was written on the board showing how many students were present and how many were absent.r each school year. Each teacher, prodominantly female (there were three male teachers in the entire school) was especially proud of her students and her school.

The class size varied a lot. Some classes were as small as eight while one 8th grade science class had 62. Perhaps the two most impressive things were the students’ impeccable behavior and the difficulty of the content they were learning. Because this is a school for the “economically backwards” it is predominately female. Most of these women aspire to further their education by going to college. The classrooms were well equipped with resources for their students. Students wore blue and white checkered shirts with blue shorts. Each student was clean and neat. The classrooms were bright and airy, welcoming and filled with visuals.

Our second school enabled us to see the flip side of Indian schools which reminded all of us of our own disparity between schools in the states. The second school was a k-5 school in what seemed to be an economically disadvantaged area. This school was more gender balanced than the other. The students were a bit more off-task, less neat in their appearance; the classrooms were not as well supplied with resources. Two students were being punished by sitting in the hallway. The classrooms were absent of natural light, dark and somewhat dreary.

We headed back to our hotel for a quick lunch and then off to Tiluka.

Tiluka is a children’s publishing company which began about twelve years ago by Radhika Menon, a local Indian women. This woman has worked with developing writers and illustrators to publish a variety of Indian stories in English and the many other native Indian languages. Only 2% of Indians can read English. For many Indians, book seem like a non-essential item since there are problems with costs for many families, storage problems for teachers and schools and difficulties for libraries to pay library services.