After a refreshingly chilly bucket bath and a sweet lassi breakfast at New Woodlands Hotel, we met Ms. VR Devika who was to be our guide but even more so, our source of wisdom, stories and inspiration for our stay in Chennai. We split our group between our two “disco vans” and set out on our first day of sightseeing.

The first thing to strike me – aside from the heat and humidity once again, were the smells! India seems to have more smells – let me rephrase that, more INTENSE smells than I have ever experienced. One moment you are breathing deeply the smell of jasmine from the fresh flowers in a woman’s hair as she passes you on the street, only to have it replaced by the smell of garbage (or worse :) baking in the sun. We have heard repeatedly that as soon as you learn something about India, you quickly learn that the opposite is also true. I have found this to apply to the smells here as well. 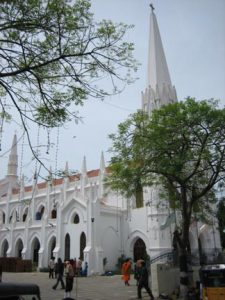 Our first stop was to Santhome Cathedral. We arrived to find the courtyard surrounding the cathedral full of people wearing their “Sunday best” – in this case, for the women, gorgeous sarees of every shade and pattern – as it was first commune for many of the children of the area. Many of us were surprised by the popularity of Catholicism, as this isn’t the “image” of India that we are often exposed to, but we quickly learned that it is a prominent religion in much of India. The morning’s service was being amplified to the people unable to fit inside the teeming church and we were able to hear some familiar tunes being sung, though in Tamil they had a completely different sound!

The children in the courtyard were immediately attracted to the array of cameras our group displayed as we were beginning our documentation of our journey. Many camcorders came out and some of us carry more than one camera so we must have been quite the scene!

We discovered right away that the children of India love to have their pictures taken and also, that they have acquired a taste for technology and prefer to see their image on your digital camera, giving a disappointed frown if you turn your camera over to show merely the BACK of a camera and not a digital screen.

We discovered that Santhome Cathedral is one of only two churches built over the tomb of a saint. Of course St. Peter’s in Vatican City being the best known, but Santhome Cathedral is built over the tomb of St. Thomas, so we removed our shoes and ventured down past lotus pools and informative notices to see the tomb where many children were praying having just received their first communion in the cathedral above.

First Communion – Photos by Amanda Griggs
After gathering together once again, we loaded our vans and headed to Fort St. George and St. Mary’s Church.
The Fort was built in 1640 and marks not only the beginning of British rule in India but also the emergence of Chennai (then Madras) as a modern city. The Fort includes a museum with paintings and written documents as well as a model of what the Fort must have looked like in the 1600s. St. Mary’s Church is also part of the Fort and is often referred to as the Westminster Abbey of the East as it is the oldest surviving British church in all of India. At St. Mary’s many of us chose to support some local women in their craft by buying handmade cards with small paintings on leaves pressed to the cover.

From here we had lunch back at New Woodlands where I learned that there are rules about eating Indian cuisine as I tried to order Naan and found that it “didn’t go” with what I had ordered and that I then needed to order additional food… what came was enough for a small army. So much for losing weight in India!

After lunch we headed to Chennai Government Museum. Thankfully air-conditioned, many of the group seemed to take a liking to the sculptures that were directly near the air conditioning units, as Devika taught us the meanings behind various poses of the gods in the ancient sculptures. The museum held dozens of large sculptures that at one time adorned altars of Hindu temples and each one told an elaborate story of the powers and actions of the gods. While the Government Museum held vastly more than we were able to see, it was a wonderful way to begin our exposure to Hinduism and the Hindu gods.

With our brains full of new sites, information and once again, smells we were on our own being dropped off at Spencer’s Plaza Chennai’s “shopping mall.” With the outward appearance of a typical American shopping mall, the illusion is shattered as you enter an amazing labyrinth of Indian shopping experience. The colors assault you as you pass thousands of carved wooden sculptures, mirrored textiles, saree and salwar shops, and more – so much more! We were there for an hour and half and while getting lost a few times, we simply did not see even a fraction of what Spencer’s had to offer. However, we were off to Fabindia so who could complain!

Whew… that was a loooong day. More adventures to come. See you then!